Have Republicans lost their animosity toward ivory towers?

Exhibit 1 — In the red state of Nebraska, we have Senate

nominee Ben Sasse, who holds an undergraduate degree from Harvard, two master’s degrees, a PhD from Yale, and is president of Midland University in Fremont.

Exhibit 2 — In the less-red state of Virginia, we have economics professor Dave Brat’s defeat of Eric Cantor in Tuesday’s House race. Brat, who teaches at the small Randolph-Macon College in Ashland, Va., holds a master’s degree from Princeton Theological Seminary (not related to Princeton University) and a PhD from American University.

So, with at least two tea party candidates with doctoral degrees headed toward the November general, has the far-right embraced academia? Are good things now coming from ivory towers?

House Republicans will hold an election June 19 to replace Eric Cantor as majority leader. Cantor plans to leave his leadership post at the end of July, but will serve out the rest of his term. Cantor has endorsed Majority Whip Kevin McCarthy (R-Calif.) as his successor.

U.S. Rep. Jeff Fortenberry was part of the congressional delegation accompanying President Obama last week to the observance of the 70th anniversary of the Allied invasion of France.

We hope this picture of Fortenberry and Defense Secretary Chuck Hagel (borrowed from Fortenberry’s House website) doesn’t cause too many conservative heads to explode. Just a couple of fellas from Nebraska enjoying a sunny day in France. 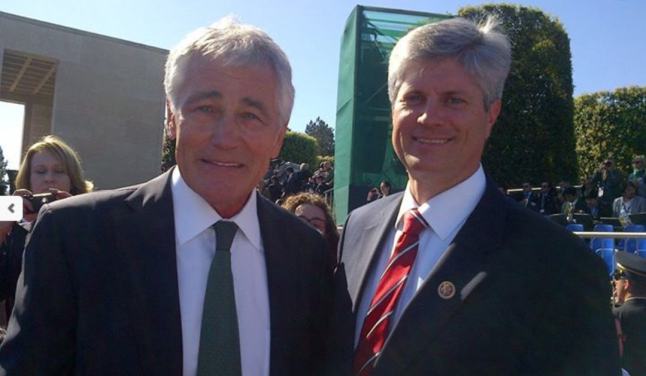 Hagel, who grew up in Columbus, testified Wednesday before the House Armed Services Committee about the dealings behind the prisoner transfer involving Sgt. Bowe Bergdahl.

Congressional leaders have complained that they weren’t given advance warning of the transfer. Hagel said time was short, a leak would kill the exchange, and that none of the five exchanged Taliban detainees  were involved in attacks against the United States.

“As secretary of Defense, I gave the authority and responsibility to determine whether the detainees at Guantanamo Bay can be transferred to the custody of another country,” Hagel said.

Too busy to keep up with Washington? Check out the "He's Your President, too!" tab.