Nebraska Senate candidate Ben Sasse’s crowing about his rapid rise in the polls has gone a bit too far. In an email distributed Friday, Sasse claims to have come from far down in the pack to nearly even with front-runner Shane Osborn in one short month. From his “this is big” email:

The problem? Only two polls have been conducted in the Nebraska Senate race. One was conducted by the Osborn campaign in October 2013. The second was conducted this week. So, the Sasse campaign either miscounted the number of months between October and February or it conducted its own poll last month and did not release the results to the public.

Or maybe he’s puffing to make the surge more dramatic than it probably was. Sasse has raked in big dollars, he’s a darling of the conservative media, and he’s run plenty of campaign commercials. It’s no surprise that he’s all but caught up with former State Treasurer Osborn. But it’s an accomplishment that stands on it’s own. There’s no need for the hype.

And it got worse when I found this on his Facebook page. I left a post asking about the one-month claim. I’ll let you know if I receive a response. 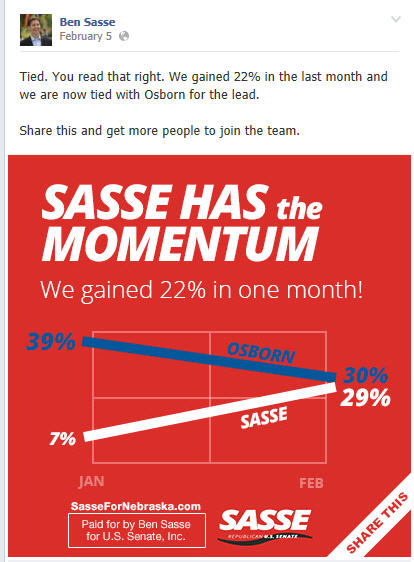 In any event, it wasn’t the only problem this week for Sasse’s e-campaign. To celebrate the birthday of President Reagan, Republican pols across the country Tweeted some of the gipper’s most noted lines. Sasse’s first try with this one had an embarrassing typo.

Normally, the Sunglight Foundation’s Politiwoops site catches all deleted Tweets, but this one mysteriously disappeared from the Intertubes. It was reported everywhere on Thursday, but notoriously hard to find on Friday. Thanks to South Sioux City Journal columnist Bret Hayworth for memorializing it.

You Voted for Them, Nebraska is normally forgiving about typos — we’ve made a few ourselves — but a professional, multi-million-dollar campaign should be able to handle 144-character Tweets. After all, Sasse is a PhD and university president.

Too busy to keep up with Washington? Check out the "He's Your President, too!" tab.